skip to main | skip to sidebar

Running Through The Paces, Pt. 2

I got back out to the range on Friday to test out my 3031 rework, as well as to run the new hunting loads through the gun to see if they're performing as expected.

Again, it was terribly windy. Not quite as bad as the last trip, but almost. I did manage to keep the chronograp standing for most of the session. There wasn't much wind this morning, just a small breeze, but by the time I got out to the range around 2pm, it had really picked up.

I'd set out to do a comparison between a few of the .22 rifles - the new Marlin 795, the older full-length Marlin 60, and an even older Romanian 1969 Trainer that I picked up early last year. I wanted to run some side-by-side comparisons of all three guns to see how they compared at 50m. Unfortunately, the venture was a bust, because my bullets were getting blown all over the targets, regardless of the rifle.

I'd only ordered one sling along with the Tech Sights for the 795, but I had what the local surplus shop termed a "Silent Sling" in a 1 1/4" width. Last week, I'd taken the GI sling I'd purchased as a template and managed to reproduce the configuration with a bit of sewing and some standard Uncle Mike's QD sling swivels, and replicated the functionality. I'd found an online guide about how to use a GI web sling around the time I modified the "silent sling", so I figured I'd give it a go. I figured a windy day was a good opportunity to see the difference. Sure enough, I was able to much more easily keep the 795 steady on target using the sling, so at least I got something constructive out of the day with the .22 rifles.

On to testing out the 3031 rework, I'd changed primers from the soft and thin CCI #400 that I'd been using, so I figured I'd redo the load and see if there was any change needed. I did a workup in small increments below, above, and above the 24.8 grain charge I'd landed on last time. This is at the top end of load data for this powder/bullet combo, so I didn't stray too far, and incremented in 0.2 grains, from 24.6 to 25.2 grains. They all shot fine, but I started a small amount of leaks around the edges at the top end loads. I also completely lost one primer in that group - not a great sign. This may be in part due to the fact that I used FC brass for the workup, which I've noticed has looser primer pockets. They're significantly easier to seat than LC brass. I'll remember in the future to reserve FC brass for tamer loads, like the VV135 plinking/accuracy load I tested last post. The velocities and accuracy matched up with the previous #400 load and the primers looked good at 24.8 grains anyway, so it looks like the load is going to stay as is.

Moving on, I switched to the hunting load using TAC and the Speer 70 grain semi-spitzer soft points. I'd already worked these up previously, and results were good at 25.2 grains. I made a small mistake in adjusting my scale, and ended up charging these at 25.1 grains instead. I had a box of 100 loaded up so I could do the same kinds of tests as last session - some at 50m, some at 100m, both on the lead slead and off the bench, unsupported.

I started off with the lead sled at 50m to check out consistency in a group of 10. I had a cotton shop towel set up to deflect brass down onto the bench to more easily recover my empties, since I had so much trouble with the brass catcher last session. I got through 7 shots of the 10, and got a jam that didn't want to clear. The bolt wouldn't seat all the way forward and lock into place. I pulled the rifle apart and played with it a bit and found the problem. A dislodged primer got into the lugging in the barrel adapter, and was getting in the way of the bolt. Dang.

I took a look at some of the brass on the bench, and sure enough - missing primers. I also noticed the numbers on the chronograph were indicating velocities above 2800fps, faster than the 25.2 grain charges I'd worked up previously. Now I was a bit confused. I'm pretty meticulous about weighing each charge individually, particularly with hot loads, so there's very little chance of an overcharge getting through. 25.2 grains is also well within the 5.56 pressure loads from TAC (max listed at 26.2 grains). The chronograph seemed to be getting consistent velocities (I still need to review them more closely), so something else seemed to be wrong.

Once my rifle was clear and everything appeared to be operating properly, I finished out the set of 10. Results were pretty good, and definitely acceptable for hunting purposes: 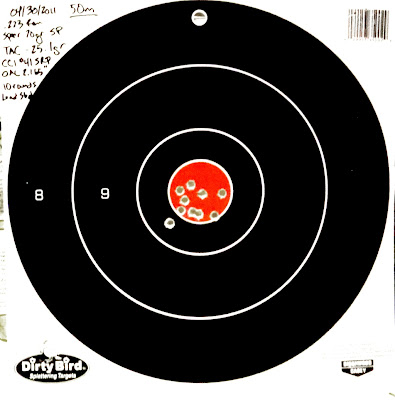 With the dislodged primer issues I'd had, I should have packed it up then an there or moved on to different loads I'd brought along to play with. But, I didn't. I wanted to have a comparison shooting the 70 grain loads without the lead sled.

On the third round in, the bolt jammed, and stuck hard. There was no getting it free then and there. It was a terrible feeling. Checking the cases, round #2 was missing a primer, so I figured it had jammed up the bolt somewhere in the upper. With my tail between my legs and my heart in my stomach, I packed everything up and headed home.

I got the rifle on the bench and ended up having to pull the buffer tube to get the bolt carrier tapped back in and the upper and lower separated. In the process, I ended up rotating the buttstock tube lock plate into the threads (note to self: use less lok-tite next time) and mangled the rear takedown pin detent spring in the process. I got the upper separated and managed to tap the bolt carrier completely rearward out of the upper (all the time hoping I wasn't ruining the upper). Lo and behold, there it was. A primer lodged in the channel for the bolt cam pin. I thoroughly checked the inside of the receiver and the bolt carrier itself, and didn't find any mangled material, so it appears that everything is still serviceable. It looks like the cam pin was restricted from moving just enough to make things very tight. I got everything assembled (minus the mangled detent spring), and verified that the action operated smoothly and locked up tight.

I've had a couple days to think what happened here, and I think I've got an idea. Sometime around the primer change and making the first full batch of 24.7 grain 70 grain loads, my scale got out of adjustment, reading heavy by a few tenths of a grain. I interpreted this as a loss in velocity due to the new primers with the TAC load, so I worked up a new set of loads, and found a match in performance at 25.2 grains. In reality, I was recalibrating my charges up to 24.7 grains or somewhere thereabout. Between that load workup and my batch of 100 25.1 grain loads, I'd recalibrated my scale, so now I was *actually* loading a hotter load. While this is still within 5.56 NATO load data, there's a reason NATO ammo has crimped primers. This put me over the pressure line where the primers started working loose, causing my problem.

Lessons I've learned from this experience:

I've also got 87 rounds of this stuff, and I'm not sure what to do with it. I may use this as an excuse to get one of them fancy bullet puller dies. I'm also considering getting the manual inertial puller out and adjusting OAL (there's plenty of room between 2.165" and max OAL to move the bullet out) to see if that will reduce pressures enough to make the rounds serviceable without having to disassemble them all. I'll have to test those one-by-one, in case they still show leaks or popped primers and avoid this problem from happening again.

Phew. What a learning experience this has been.
Posted by John the Texaner at 5:24 PM No comments: